Go inside and stir your flubber 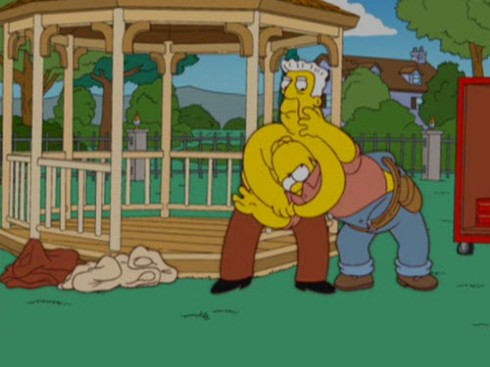 Couch gag: The family are in a vending machine. Ralph Wiggum chooses Homer and promptly bites his head off.

Synopsis: Marge forms her own carpentry business but gender bias prevents people from using her, so she hires Homer as a front. Meanwhile, Bart discovers Skinner’s allergy to peanuts and forces Skinner to humiliate himself under threat of a peanut attack.

Discussion: OK, so this episode has a few laughs and some great quotes, but I still found myself wondering what the hell was going through the minds of the writers when this was presented.

I like that Marge found a vocation. I can accept that Homer had to be the face of it because the resident of Springfield are sexist pigs. The bit about the roller coaster… what the hell? It feels like they were on their way to a sensible conclusion but needed to stretch it out a few more minutes so garbled in whatever crap came to mind. Even after the town saw Marge fixing the roller coaster, she still didn’t get any recognition.

Then we have the subplot of Bart and Skinner’s allergen fight. Really? I get why Bart would use this peanut knowledge to his advantage, but ending up in an allergen fight is way below par. Or is that above par…? Anyhoo, it’s stupid and unentertaining.

There are some great quotes though. Homer’s butt crack giving Marge an idea is funny stuff, as is Homer using the carpentry book set as a footrest (look, you had to be there). This ep proves there are still some great lines in the show, even if the overall plot is drifting along on broken promises and forgotten dreams. Overall, the ep bobs along enough for me to not stab my eyes, but not enough for me to score it above mediocrity. Even funny quotes can’t save this roller coaster wreck.

Cough me out of your life 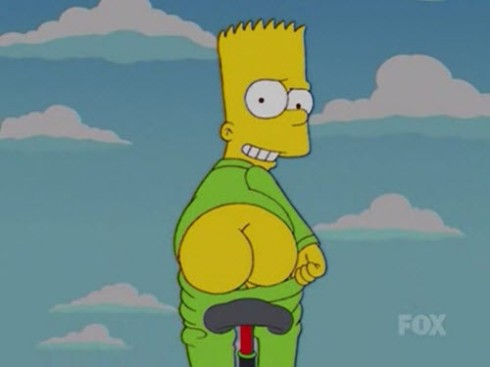 Couch gag: The Simpsons are squirted out of a piping bag onto a cake.

Synopsis: Bart and Homer enter a robot derby, while Lisa mourns several cats in her life.

Discussion: Ya know, this episode isn’t too bad. It’s yet another variation of a theme of father-son bonding but at least they’ve both realised their unique relationship: “I like you, son”, followed by, “I like you too, dad.” it showcases Homer’s flaws, such as not being able to build anything remotely useful. We’ve seen many, many examples of this in the past: a spice rack for Marge, a BBQ pit (which was “art”), various inventions which seemed like a good idea at the time…

In this case, Homer’s inability to be a DIY guy forces him to become the robot, suffering injuries when fighting other robots. Homer being Homer, he takes it all quite well and doesn’t seem to suffer any more brain damage than usual. Although there’s not really anything new to offer about the father-son relationship, the setting of robot wars is actually kinda fun.

Meanwhile, Lisa’s mourning the death of Snowball II. Unfortunately the run of bad luck continues, and the next two Snowballs plus a Coltrane meet the Grim Reaper soon after Lisa brings them home. The last cat, Snowball V, is renamed Snowball II as it saves on buying a new bowl and it happens to look very much like the original Snowball II anyway. What a coincidence! This is a technique only acceptable in TV shows and it’s called “pressing the reset button”. It basically states that whatever happens, you can metaphorically press the reset button and the incident is never mentioned again. I’m sure you can think of 5 examples straight off the top of your head. To prove this point, Principal Skinner walks past and Lisa refers to him as Principal Tamzarian

This is an average episode, full of everything you’d expect. Maybe that’s the problem with these later episodes, they’re predictable and not surprising like earlier ones. It’s not just the scrapes the family find themselves in, everything about the show is dull now. Still, we press on…