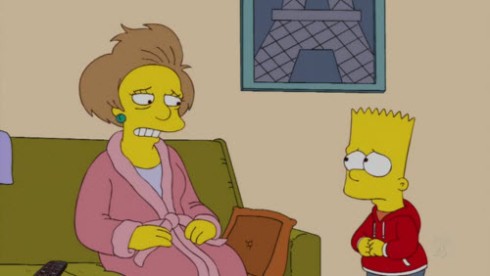 Couch gag: The Simpsons have a gunfight around the couch

Synopsis: Bart accidentally gets Mrs Krapappel fired, and tries to make it up to her by encouraging her to live the life she’s always dreamed. Failing that, he tries to get the substitute teacher fired.

Discussion: It’s been a very long time since we’ve seen Mrs K, and I was hoping her pathetic existence was being challenged in some way that makes her a better person. This episode is a half-arsed attempt at that, and fails.

Mrs Krabappel is a great character when she’s being pushed out of her comfort zone e.g. secretly meeting Skinner for sexy rendezvous, going on strike (“Honk if you love cookies!”) or engaging with a secret lover via love letters. When she’s indulging in her pathetic life, she’s not very interesting, even if Bart is the cause of it (and let’s face it, it’s always going to be Bart who causes her misfortune).

This time, Bart tries to be helpful. Seeing Homer is easy-going once he’s had a few beers, Bart tries to relax Edna by spiking her coffee. The plan goes awry and Edna ends up being fired, replaced with a hip young teacher who survives on energy drinks and texts homework to his students. Feeling bad for ruining Edna’s life, Bart buys her a self-help book (a parody of The Secret) and Edna starts her own muffin store.

Now, all this is well and good… but the episode rapidly declines after this. Edna’s self-help book could have been stretched out longer and given more satirical views such as coincidences which help her along in opening her muffin store (it’s all part of law of attraction, you know…)

Anyhoo, the episode has potential but never quite gets there. It’s rushed, forced and doesn’t really develop any relationship or story. Edna’s decision to open a muffin store even though her dream has always been to be a teacher doesn’t make any sense; maybe it would have played better if she’d helped Bart get Zack fired, or combined dreams and had a muffin store where she could teach kids (if they can have coffee places in bookstores, I don’t see why you can’t have a classroom in a muffin store). I liked the parody of The Secret, but to me the ep fell flat although it’s good to see Mrs K again. She won’t be around forever 😦

We flushed your sin sticks to Hell 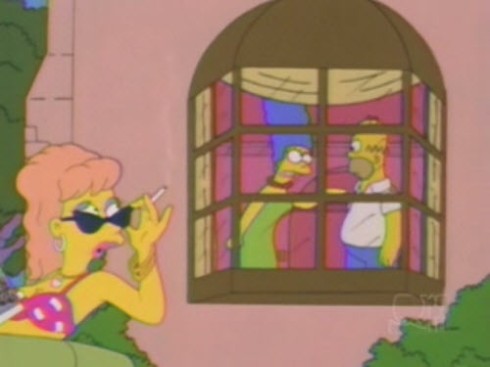 Brawl in the Family

Couch gag: The Simpsons are a hedge, made into topiary by a gardener

Synopsis: The Simpsons receive private consults from a social worker when they go one bicker too far. Ginger and Amber, the cocktail waitresses Homer and Ned married in Vegas, return to resume their lives with their “husbands”.

Discussion: In this episode, we have two distinct storylines with very little to do with each other. In the first, Maggie calls the police when Homer and Bart fight and Marge and Lisa try to pry them apart. Gabriel, a social worker, follows the family and tries to connect them as a family unit, teaching them to work together. This is finally achieved when the family conspire to drive out Amber, who has returned as Homer’s “Vegas wife”.

Firstly, WTF? The ep takes a full 12 minutes to get to the point where Ginger & Amber return. Secondly, the first half of the ep doesn’t have anything to do with the second half. Thirdly, their return can stretch out to a full episode on its own and the viewer is denied this for… this: a patched-together episode which doesn’t really make any sense and holds no heart either.

Homer and Ned’s escapades in Vegas has the potential to be a great plot as the wives return, but this is overshadowed by the audience’s still-numb brain attempting to work out what the hell just happened in the first half of the ep. Gabriel is lovely but the plot can’t hold out a full ep and the attempts at making the Simpson family a functional family unit go awry. This also has the potential to be a good plot, but falls far short of delivering.

Having said all that, there are some very good bits. Homer’s insistence that Gabriel is an angel, the Vegas wives showing their uh, less-than-classy habits and Homer and Marge having another of their infamous fights where Homer is left to sleep outside. However, the ep as a whole just doesn’t work.

I want to take the opportunity to mention the death of series regular, Marcia Wallace. She voiced Edna Krabappel (“Ha!”) and the producers have said they will retire the character. It’s only fair to retire Edna, in the same way Lionel Hutz and Troy McClure were retired after Phil Hartman’s death. We’ll miss Edna and our thoughts are with family & friends of Marcia.

The Spirit of Life