He turned on the radio to cover the smell 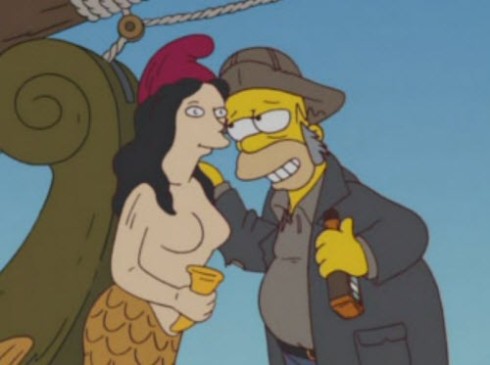 Diatribe of a Mad Housewife

couch gag: The family pop out of a slice of pie, Homer starts munching on it.

Guest Voices:
Thomas Pynchon as himself
Tom Clancy as himself
Mary Kate & Ashley Olsen as themselves

Synopsis: Marge writes a historical romance, which sends Homer into a fit of jealousy as he thinks the novel is about Marge’s love for Ned Flanders.

Discussion: Feeling inspired, Marge writes a steamy novel which sends the town’s rumour mill into overdrive. Is Marge and Homer’s marriage a sham? Is Marge really in love with Ned Flanders? Does snuggling really sell? (If you’re E.L. James, it does)

There’s a lot at play in this episode, and most of it is fantastic. Homer is fired by the power plant and becomes a used car salesman before resigning to become an ambulance driver. This sequence is rushed and pointless, but it does show Homer actually being fired as opposed to just rocking up with a random new job. Marge’s inspiration to become an author is a bit dodgy, but there’s little motivation for writers apart from we love writing, so anything that inspires Marge is gonna be lame. Marge is an artist though, so maybe that angle could have been worked; she’s a talented painter so why not use that background to segue into writing?

Anyhoo, her novel is cliched and steamy, but sends Springfield (and eventually, Homer) into thinking Marge is really in love with Flanders. Again, this could have been worked a little better but it’s not South Park, it would be hard to get the infatuation and fantasy a realistic feeling without alienating the audience: Marge and Flanders? Marge has had lustful thoughts before- waaay back in season one, she considered having a fling with debonair Frenchman Jacques (you know, the bowling guy). But Marge and Flanders? Luckily the rumours are untrue so Marge and Homer’s marriage can continue just as strong as ever.

The interesting bits are encased in Marge’s novel. Lisa’s segmentation of her brain is rather amusing but the depictions of Marge’s main characters are just hilarious and really well done. If for no other reason, watch the episode for these bits.

Doody doody doo to you too

I will not call my teacher “Hot Cakes”

Couch gag: The couch collapses when the family sits down.

Guest Voice:
Sam McMurray as Gulliver Dark, the guy at the burlesque club.

Synopsis:
Homer is invited to a stag party and photographed by Bart dancing with an exotic dancer. The photo goes viral around Springfield, leading Marge to throw Homer on the streets. Homer apologises to a distraught Marge and tracks down the dancer in order to show Bart that women aren’t objects and deserve respect.

Discussion:
This is the first of Homer’s many indiscretions. It’s a wonder he doesn’t have a permanent bed at Barney’s place (in this episode, he bunks with Barney. In future episodes, he stays with Lenny, Carl, Flanders, Kirk van Houten and assorted others).

As part of the Simpsons canon, the episode serves to round out the characters a bit more. By Marge objecting to Homer’s indiscretion, she becomes more than an objectified woman: consider yesterday’s episode where she felt the thrill of having another man’s attention and being the object of his affection. Not only has Marge backflipped (double standards?) but she has also fulfilled her role as mother by insisting Bart treat women with respect and not as sex objects. I’m surprised Lisa doesn’t have more to say, but then again in these early episodes, Lisa’s full array of values are yet to be established and fully realised (she eats shrimp at the restaurant, for example).

My favourite scene is the burlesque hall, where Mr Burns and Smithers are (apparently) on a double date with twins. I’d love to see more of this… although Smithers’ sexuality is strongly questioned so it’s unlikely to be explored further.