It hurts where the tiger’s biting it 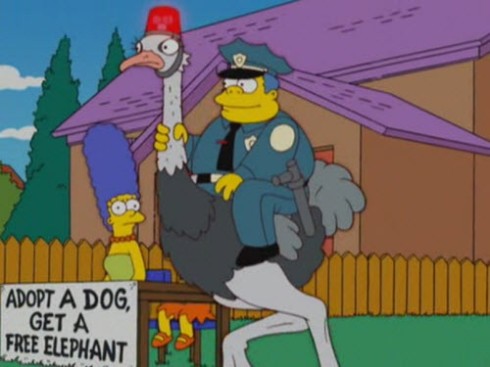 Jazzy and the Pussycats

Couch gag: Homer, as King Kong, kidnaps Marge from the couch and takes her to the top of the Empire State Building while biplanes attack him.

Guest voices:
Meg White as herself
Jack White as himself

Synopsis: Bart becomes a jazz legend while Lisa adopts animals who are about to be euthanised.

Discussion: The Simpsons often starts with a situation that ultimately causes the main storyline but is unrelated to it. In this bizarre episode, Homer’s Vegas wife Amber has died, Bart plays up at the funeral, leading Marge to invest in a drum kit so he can concentrate, he becomes a jazz player because he’s instantly good at playing, and because Lisa is sad, she gets to adopt a new pet (which turns into several pets; and contradictory to the title of the episode, none are cats).

I’ve deliberately chosen the stupidest quote and the stupidest scene as the title and photo for this post. The whole episode consisted of random bits thrown together (including a really funny sequence involving Bart and the White Stripes, based on their video clip) and really didn’t have much of a point to it. Several times during the ep I had a dazed and confused look on my face. There are minor moments where a smirk crossed that dazed and confused look, but for the most part, this episode never reached mediocrity. It’s disjointed, random, seemingly improvised on the spot and overall ridiculous.

As a side note, I’ve been thinking this week about spec scripts. Star Trek TV franchises often accepted scripts from fans and I wonder why The Simpsons doesn’t do the same. OK, I concede there’s a lot of legal mumbo jumbo involved, but the fans are turning away from the show in droves (this episode’s original airing garnered 9 million viewers, down from the heyday of 12 million viewers, and season 25 has a measly 4-5 million per episode). Why not ask the fans to submit scripts? The fans know what works and why- let them bring back the glory (beating a dead horse?). Often in this blog I’ve offered alternate plot points that I think would have made the episode better, I think the forum should be opened in order to let fans write for the show and try to bring back some semblance to what the show used to be. As fans, I think we can do it.

Nerve gas is not a toy

Couch gag: The family’s sizes are reversed, so Maggie is the biggest and Homer is the smallest.

Synopsis: Bart eats a metal Krusty-O and needs to have his appendix removed. While visiting him in hospital, Lisa meets an old friend, Bleeding Gums Murphy.

Discussion: Here is Australia, this was known as one of the Lost Episodes of The Simpsons. No idea why, but it was left out of the original airing of season 6 and seen a couple of years later, if memory serves. Anyone else remember this?

Anyhoo, I like this episode. We first met Bleeding Gums Murphy in ‘Moaning Lisa‘ way back in season 1. His influence over her is still strong and she is miserable when he dies. He’s the first person to die in the Simpsons universe- others have died (such as Marge’s great aunt), however they had not been seen on-screen previously. It’s implied that Bleeding Gums and Dr Hibbert are brothers, and it was implied in an earlier episode that Bleeding Gums had another brother, a lawyer if I’m not mistaken. Bleeding Gums and Lisa play Jazzman together in his hospital bed and also afterwards when he appears in the sky while the nearby jazz station is playing his record.

It’s a sweet episode. Homer does nothing to help Lisa understand death, Bart is sympathetic and even spends his Krusty-O compensation on buying Bleeding Gums’ record for a mourning Lisa. I’m a sucker for the musical numbers and I love Jazzman as sung by Lisa. It’s exactly the sort of send-off Bleeding Gums would want and still keeps the uplifting spirit of the show.