Discussion: It’s Halloween time again (I swear this comes around every 3.5 weeks…) and Halloween episode #20 is nothing spectacular.

Dial M for Murder or # to Return to Main Menu sees Bart and Lisa plotting to murder each other’s teacher. It’s very Hitchcockian and done (very well) in black & white, but I still didn’t love it. Lisa’s morals are front and centre and don’t add anything to the segment. Get on with the killing, already! It was very much a cat & mouse scenario without any really satisfying elements.

Don’t Have a Cow, Mankind shows how the new Krusty burger turns people into zombies (called “munchers” here). Zombies? Really? Excuse the pun, but zombies have been done to death. Some originality, please.

There’s No Business Like Moe Business is inspired by Sweeney Todd, the story of a barber and his baker girlfriend who kill people and sell their flesh in pies. Here, Homer accidentally dies on Moe’s beer machine and the sweet blood makes the beer very tasty. Moe tells Marge Homer has left her to seek the company of other men and tries to woo her. I like Sweeney Todd and I’m a sucker for musicals, so this segment is the winner in my book. I would have liked it more had it not been a play…

This Halloween offering isn’t anything special. It lacks originality but the general storylines are OK. It doesn’t offer anything funny, new or clever and is missing the satirical views of other Halloween specials. Meh, it’s an average ep.

The only pants that understand my complex hiney 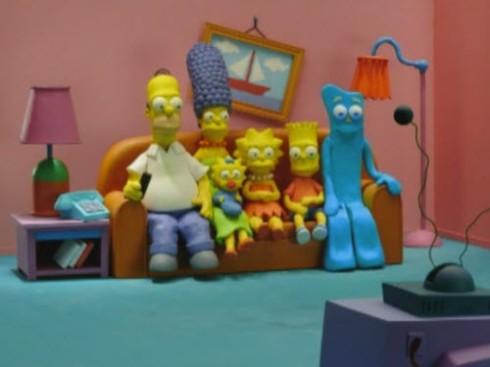 Synopsis: Lisa turns Groundskeeper Willie into a gentleman, while Homer searches for a new pair of blue pants.

Discussion: Who knew buying a replacement pair of blue pants could be so darn entertaining? When Homer damages his last pair of pants through “normal wear and tear” (go-karting 50 laps with his bum on the ground), he looks everywhere for a new pair only to be constantly told they’re not made anymore. This subplot is never fully resolved: his one-man advertising campaign allows the pants to be manufactured again and everyone is wearing them… but did Homer end up with a new pair?

This is all backdrop to the main plot of Groundskeeper Willie becoming a gentleman, a parody of My Fair Lady. It’s the first time we’ve seen Willie take centre stage in an episode, and I must admit it was enjoyable. The songs were also parodies of songs from My Fair Lady, however they didn’t get to the goody fun-ness of other musical highlights; these seemed forced. They’re not particularly witty or clever which dampens the spirit of the ep considerably. Having said that, it’s still the best episode thus far of season 17 (although the new coach, the Bombardment! guy, was SUPER ANNOYING!)

Lisa does well at transforming Willie and it works quite well, however I don’t think that turning someone into a gentleman is technically a feat of science…

A Star is Torn

Couch gag: In a parody of Get Smart, Homer goes through a series of doors before dropping through a telephone booth to the couch.

Synopsis: Lisa is entered into a singing competition with Homer as her manager, but he embarrasses her and is fired.

Discussion: This episode parodies American Idol type shows as well as manager-parents. Homer has been a manager before (remember Lurleen?) but somehow screws things up for his little girl and she fires him.

How this ep was expected to go: An all-out battle between Lisa and Clarissa which ends in backstabbing and Homer winning Lisa’s love again. How this ep actually was: Clarissa being kicked out and Homer representing Cameron, a cute kid with a winning smile and a dumbass song (written by Homer in order to be voted off).

Clarissa is voiced by the talented Fantasia Barrino, herself a product of American Idol. Why she only sings one song before falling off the face of the planet, I don’t know. Did Fantasia not want to speak in the role? Was she unimpressed and the character was cut? In any case, Clarissa falls through the Buzz Cola trapdoor, leaving Lisa and Cameron to be finalists.

Once you get over What-Happened-To-Clarissa? the ep is actually quite sweet. It’s yet another attempt at bonding between Homer and Lisa, which, as we’ve seen many times previously, never goes to plan. This is probably the closest it has ever come to a fully functional relationship.

All Singing, All Dancing

couch gag: the loungeroom is on a treadmill and Homer gets caught, going around and around…

Synopsis: Homer and Bart hire a Western movie on video and it turns out to be a musical. Disappointed, they complain until Marge points out they’re all guilty of singing in public. Snake takes the family hostage but their singing saves them.

Discussion: Well, it’s a clip show. This one is held together by a subplot of Snake holding the family hostage; their singing saves them but also threatens him as he comes back to shut them up.

Despite my love for musicals, I’m just not feeling this one. It contains all the best songs from the series (the spontaneous ones, which excludes Dr Zaius). Don’t get me wrong- I love revisiting the best songs and singing along… I guess I just feel that the ep lacks substance and they’ve tried to make up for that by having Snake come in wielding a gun.

Personally, I’m starting to think that season 9 is where the show jumped the shark…

The Spirit of Life