Was mommy a monkey 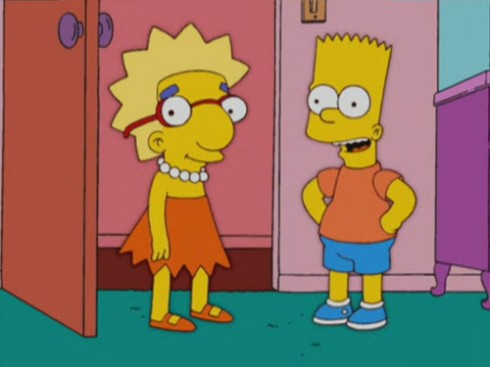 Synopsis: After discovering the evolution exhibit at the local museum, Ned Flanders encourages creation to be taught in schools.

Discussion: As I type this, there is a debate between Bill Nye and Ken Ham about whether creation is a viable option of origins in today’s world (I’ll post the link when it’s finished- it’s currently live and probably finished by the time most people read this).

Anyhoo, the subject of science vs religion is not new to The Simpsons. We’ve seen Lisa getting her head around the angel fossil, for example. This episode doesn’t bring anything new to the table and although the ep was praised for “biting satire” and “encouraging critical thinking”, I don’t see it. What I do see is how the episode dodges all the main points of either point of view (POV). The central theme in the ep is Charles Darwin (something that Ken Ham is literally talking about as I type). Marge’s obsession with On the Origin of Species leads to her giving Homer a beer bottle in the court which somehow proves that Homer is related to a monkey, and to get Ned to admit it.

I get it, it’s supposed to be funny and satirical, but it comes across as a lame attempt to resolve the issue within the 20 minute constraints of the episode. Did we need this episode? No. It’s been done before, and sure, it’s a topical issue (particularly in Australian schools in 2014) but I don’t think The Simpsons is the correct place to be airing these sorts of issues. When you’ve got two polar opposites like Ned and Lisa, neither are going to budge on their belief systems so the episode cannot move forward nor add anything to the canon.

Having said that, there is so much more that can be added. What I’d really like to see is Lisa vs Ned on say, the book of Leviticus. (If you haven’t read Leviticus, it’s full of gems.)

I’m living in a cuckoo clock

My name is not “Dr Death”

couch gag: The couch turns into a monster and swallows the family.

Synopsis: Marge gets the part of Blanche in a musical version of A Streetcar Named Desire. Maggie is put into daycare where her pacifier is confiscated so she tries to get it back.

Discussion: Let me just say, I love the musical episodes. They’re witty and clever and catchy. This is helped by my sister being a massive Simpsons fan – she received a CD of songs from the show which she listened to repeatedly during these early years. The songs of this episode were on it (along with about 20 others from various episodes). Listening to the opening song of the musical about New Orleans, I can absolutely see why it would be offensive to citizens. However, this is The Simpsons and their take on cities and countries is usually unflattering. Just a warning now, I won’t be holding back when we get to the Australian episode. Just sayin’.

But I digress. Maggie’s daycare subplot is a precursor to 2012’s The Longest Daycare, which was nominated for an Oscar for Best Animated Short Film. If I recall correctly, the short film was shown in theatres before Ice Age 4. Although other episodes of the series focus on each of the Simpson family, Maggie doesn’t really do much so it’s difficult to have an episode focused on her. When she is focused, it’s almost as a peripheral character, such as Moe taking a shine to her. Here we’re treated to a subplot where Maggie, obviously with the same intelligence as her sister Lisa, retrieves her pacifier from a locked cupboard in the daycare. Personally, I feel this takes away from the major plot of Marge’s acting debut. When Homer picks up Maggie from the daycare and is surrounded by babies sucking on pacifiers (an homage to Hitchcock’s The Birds), it’s just weird. I get what they’re trying to do – in The Birds, there’s no music score. It’s unnerving and unsettling and perfectly recreated here. But it doesn’t really belong. It’s trying to juxtapose itself against the next few minutes where Marge et al are performing in the musical. The pacifier scene doesn’t fit.

Overall, I love the episode. The songs are clever and essentially Simpsons-esque. Each character is allowed to perform using their natural voice (although it could be just as funny satirising use of other professional voices in productions). And who knew Ned Flanders was so buff?

Huzzah for the shopkeeper

Couch gag: The Simpsons do a little dance

Synopsis: At Ned’s barbecue, Homer makes a wish that Ned’s new business will fail. His wish comes true but Homer has a change of heart and invites all Springfield’s lefties to Ned’s store. Meanwhile, Bart takes up karate but finds the class a lot less interesting than expected.

Discussion: In a moment of Mr Burns-like nastiness, Homer wishes Flanders’ store would go out of business and for Ned to end up broke. It’s somewhat uncharacteristic for Homer to be quite so nasty, but he redeems himself at the end of the episode by inviting all the southpaws to Ned’s store. This isn’t so much about rivalry, Homer is just pissed off at that moment and can’t think of a more appropriate wish for the chicken bone.

Honestly, it’s not a favourite episode. I dislike happy endings where everything is neatly tied up. Not that I want Flanders to fail, I’d just like to see Homer accidentally cost Flanders his livelihood before screwing things up even more, trying to fix it (before anyone asks, It’s a Wonderful Life is definitely not one a fave film; the movie is referenced in this episode).

Couch gag: Snowball and Santa’s Little Helper squeeze onto the couch with the family.

Synopsis: Homer feels that Ned Flanders’ perfect family is being rubbed in his face, so when Bart and Todd enter a mini golf tournament, a wager is placed that the father of the boy who doesn’t win has to mow the lawn wearing their wife’s Sunday best. Bart and Todd reveal themselves to be equals at the game, deciding at the final hole that they want a draw. Because neither boy won, both Ned and Homer fulfill their wager.

Discussion: Here we’re introduced to the whole Flanders family (even after all this time, I’m still confused which one is Rod and which is Todd…) The episode deepens the rivalry between Ned and Homer. Well, Homer’s rivalry and Ned’s love thy neighbour attitude. Ned loses his temper several times within this episode, which rarely happens in future episodes (for reasons explained in later eps).

Again, not a favourite episode although I think the reason for this is simple: I’ve seen it far too many times. It’s hard to look at these early shows with a fresh eye, especially as I know how things work out and how relationships progress.

Of course, the Homer-Ned rivalry was first visited in ‘Call of the Simpsons‘ when Homer became jealous of Ned’s RV and sets out to buy a bigger, better one. Homer is easily aware of his family’s flaws, as was demonstrated in ‘There’s No Disgrace Like Home‘ where he compares his family to a seemingly perfect one and takes his own family to therapy in order to improve their inter-familial relationships. It’s a recurring theme; Homer wants to deconstruct the Flanders family just to prove their imperfection. Ned tries so hard to be perfect (even calling Rev Lovejoy to ask advice on simple matters) so he is aware of his imperfection although Homer never sees it. In any case, what this episode is really demonstrating is Bart’s desire to be just a regular kid without any pressure.