Now chew through my ball sack 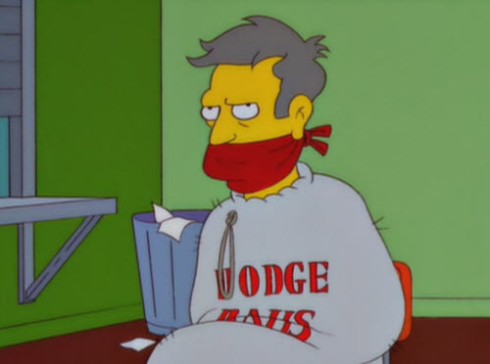 Science class should not end in tragedy

Couch gag: The family are in a football tackle and Maggie emerges to make a touchdown.

Synopsis: Bart, Lisa and the kids of Springfield are trapped by snow, and overthrow Skinner to run the school.

Discussion: This is a really good episode. It’s a little bit Lord of the Flies when Bart overthrows Skinner, but this is something fresh and quite original considering some of the rubbish we’ve been seeing from season 12.

There are moments of animated magic, so the ep is not quite down-to-earth, but still, there’s elements in there that fill me with hope that this isn’t the end of the good episodes. There are some classic, memorable lines such as “I’m tired of taking orders from G.I. Jerk” and “You’ve slapped your Willie for the last time!” as well as the quote chosen for the title of this post.

It’s also nice to see Homer and Ned bonding as they try to save the kids, as well as some good work by Nibbles the Hamster. In fact, this episode feels nothing like Christmas; if they hadn’t mentioned it at the end, I’d forget all about it.

Not if they were called scum drops

The Principal and the Pauper

couch gag: The Simpsons are dressed as astronauts and when they sit on the couch, it blasts off.

Synopsis: At a 20th anniversary celebration for Principal Skinner, an army sergeant rocks up and claims to be the real Skinner. Skinner is revealed to be an imposter named Armin Tamzarian.

Discussion: Could this be the episode where The Simpsons jumps the shark? The Simpsons has a reputation for parodying films, and this ep follows the basic plot of the 1993 film Sommersby. However, it never really seems to get there. There’s no satisfying conclusion to the episode; the townsfolk want their weenie back and send the real Skinner out of town tied to a train. It’s considered non-canonical (and for darn good reason- how do you come back from such a ridiculous plot?) and even Matt Groening himself admits the episode was a mistake.

So, where exactly does this ep fall down? My hypothesis is that Skinner is the least likely to be an imposter. Yes, he’s a weenie, but he’s our weenie. We’re in season 9 now, which has been plenty of time for the audience to know Skinner. His story of vulnerability just doesn’t wash. A radical teen who can’t bring himself to tell a mother that her son is dead so adopts his hero’s life instead? Puh-leese! Come on, pull the other leg. Maybe if Agnes saw straight away that this is what she was looking for in a son, then maybe it might possibly work. But no. Armin Tamzarian has a cool name but that’s about it. He’s portrayed as even more of a weenie than the audience expects. The teacher/principal character need to be a foil for the students, but revealing Skinner to be an imposter takes away that dynamic and never replaces it.

This jump in story arc isn’t really mentioned again, according to Judge Snyder’s ruling at the end, however Lisa does refer to Principal Tamzarian in a future episode (which we’ll get to eventually).

This leaves the question, which character could pull off such a plot line of being an imposter?